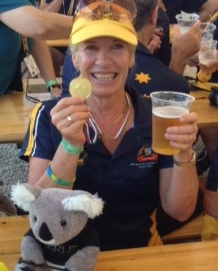 My story starts back in 2007 when I moved to Rose Bay. I was looking to do something energetic and perhaps competitive. I made contact with the Rowing Club and had a try out with them, but soon noticed the new Dragon Boat Club on the water. The thought of twenty paddlers together in the boat, a sweep and a drummer was quite appealing to me.  I became a member of the Derwent Storms Paddling Club.

The Dragon Boat Club was only just beginning to grow and adopt sound coaching techniques and was participating in Masters Events and National Championships outside of Tasmania.

A few of the paddlers decided to aim higher and attempt to make the National Team. The Auroras, as they are known, participate in the biennial International Dragon Boat Racing Championships. I didn’t really think I had much of a chance, so I didn’t put my name forward in the early part of the selection process.

All across Australia, Dragon Boat paddlers were attempting to gain selection in the Auroras in the various categories from juniors through to Senior C: Over 60 years of age. The selection campaign was rigorous and competitive and designed to select a team for each category who were fit, had excellent paddling technique and were committed to improvement. The next IDBF Championships were to be held in Szeged in Hungary in July, 2013.

The National Coach, Sergei Cuscha decided to visit each state to check up on the progress of the paddlers who had made it through the early stages of the selection process.

In early May of that year, he came to the Derwent Storms Dragon Boat Club at Lindisfarne wanting to see first-hand how the paddlers were going.

Other club members, including myself, were asked to come along and make up a crew to get the boats on the water. Unknown to me, Sergei was also looking out for another member for the Senior C team.

We paddled quite a hard session around the bay and he seemed quite pleased with the coaching within the club and the effort and commitment of paddlers.

Sergei was in the pick up boat casting an eye on the paddlers and apparently asked who the paddler was sitting in the back seat (it was me).

After the session he came up to me and asked if I would join the Auroras Senior C Squad for the upcoming IDBF Championships only three months away in Hungary.

Did you have any hesitation in taking on any aspect of this amazing opportunity?

I was flattered, but really couldn’t get my head around everything that I had to think about and do. There were selection camps to attend here in Australia where team coaches would be assessing paddlers for their potential to paddle in particular crews and a number of fitness thresholds that had to be achieved.

Everyone else had a big head start on me!  Mother’s Day 2013 would be a day to remember. What a present!

How did you go about preparing your body for this undertaking? (ie your training and program set by your coach – I mean as a national team you were spread out all over Australia)

Early morning jogging, regular gym sessions, four paddling sessions on the water each week, and all this throughout the cold and darkness of the winter.

I enlisted my husband’s help to keep me going. He joined me on the early morning jogs and he joined the Dragon Boat Club and began to paddle!

To ensure consistency of effort and fitness benchmarks, the National Team coach had State coaches to oversee our preparation. This assisted greatly our on-going motivation and ensured we were doing each exercise benchmark correctly.

Our Club encouraged and supported us by ensuring there were boats on the water, and then also by running fund raising events that assisted us financially with the costs of attending selection camps then eventually the trip to Hungary to compete.  I was 1 of 4 Tasmanians to be selected  How proud was I!!  There were 352 Australians selected for the World Dragon Boat Championships

So tell us about the event

We had a 5 day training camp in Gyor, Hungary, which was very intense and then we bused to Szeged, for the Championships.  I was selected for every race and even stroked in the 200m, we won silver.  Our first race was the women’s 2k race we won silver in that race as well, but our next race was the mixed, 2k we won gold in that race, how excited were we.  Our last race which was in intense heat, was the women’s 500m, in the semi finals we were picked at the post,  by a strong Canadian women’s team, so in the finals’ we knew we had to give it everything, which we did and we won gold, it was a fabulous feeling, something I will never forget, getting selected, the hard training and the wonderful friends I have made.

What advice do you have for anyone who gets an opportunity like this?

This opportunity came to me somewhat by chance, but I encourage anyone to have a go. Dragon Boat Racing like many other sports that have a competitive element and competitions at various age and skill levels enable anyone to strive toward the highest level of competition.

“Have paddle, will travel,” is a saying often heard around the club. I have participated in events in each state of Australia and international events in Hungary in 2013 and Canada in 2015.

Age is no barrier, in fact the more time you have, the more opportunities you have. Dragon Boat paddling caters for the weekend paddler that might like the social aspect of the club, and also caters for the sports enthusiast who wants to learn the skill and participate at the highest level.

Whichever it is, have fun!